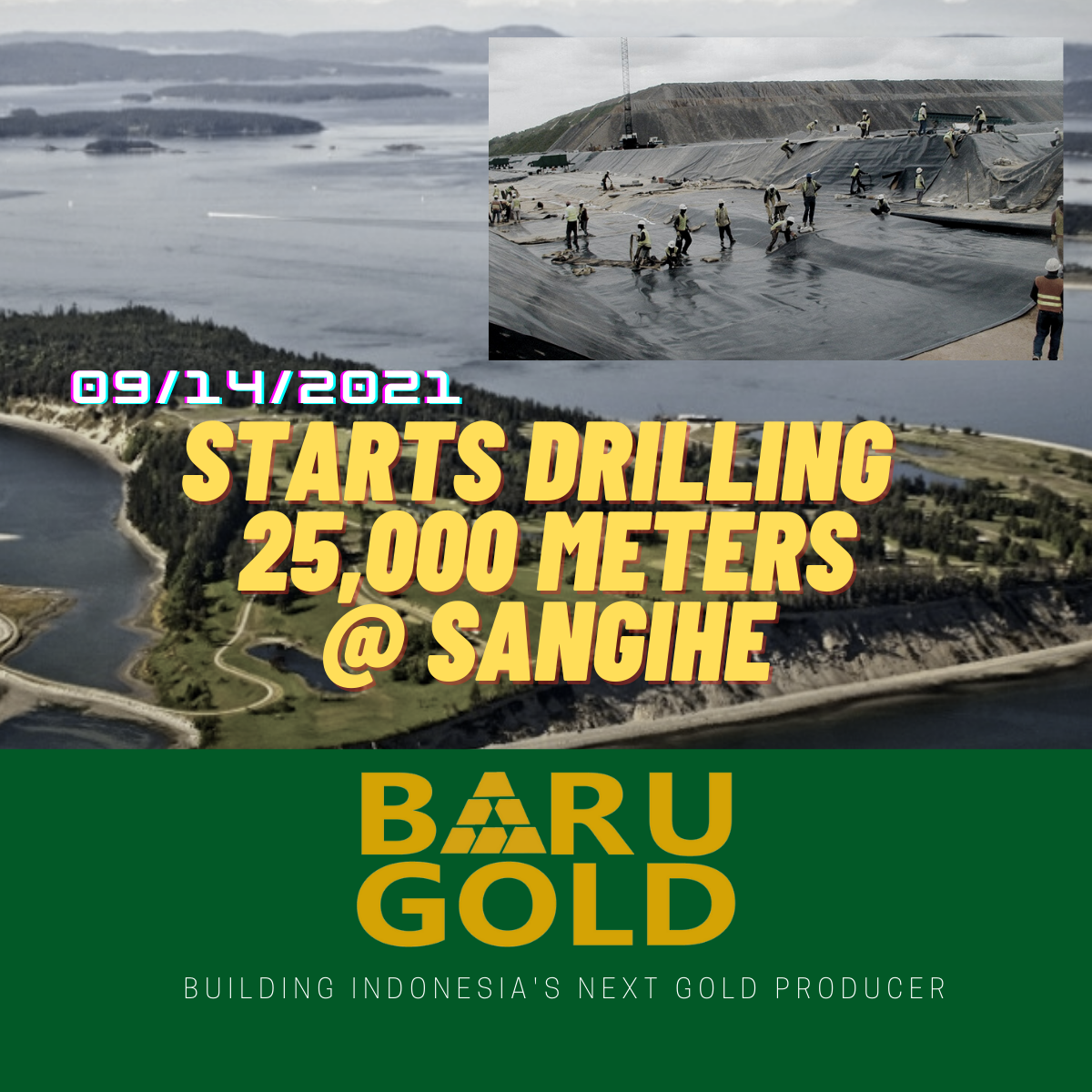 Baru Gold Corp. has now approved the budget, signed the drilling contract and embarked on a 25,000-metre drilling program.

This Resource Development program will incorporate the use of a track mounted Reverse Circulation (RC) drilling rig and is expected to take 12 months to complete. The Company has selected Indodrill of Bogor, Indonesia as the drilling contractor to complete the work.

The initial area targeted for this drilling is covered in the Sangihe 2010 NI 43-101 report which identified 835,000 ounces of gold as an inferred resource between Binebase and Bawone villages over approximately 1.2 kilometres. An infill drilling program will be conducted in this area to upgrade some of the inferred resources into indicated and measured resource status.

Thereafter, exploration drilling will continue over an additional 1.45 kilometres from Bawone to South of Salurang village following the continuation of this geochemical anomaly. Once the initial exploration drilling in this area has been completed, the identified resources will then be infill drilled to bring some of these resources into indicated and measured status as well.

Terry Filbert, Chairman and CEO of Baru Gold, commented, “With a pre-feasibility in progress and mine construction commencing soon, the Company’s activities will ramp up now that we are moving past the latest wave of pandemic and administration delays. This drilling program plan will prove up and add ounces, and exploration upside, to the Sangihe area which has only seen 10% of the land package of 42,000 hectares explored and sampled with modern techniques.”

Note: The Company cautions readers that the any production decision made by the Company will not be based on a NI 43-101 feasibility study of mineral reserves that demonstrates economic and technical viability and as such, there may be involved increased uncertainty and various technological and economic risks such as the interpretation of drill results; the geology, grade and continuity of mineral deposits; the possibility that future exploration, development or mining results will not be consistent with our expectations; commodity and currency price fluctuation; failure to obtain adequate financing; regulatory, recovery rates, refinery costs, and other relevant conversion factors, permitting and licensing risks; general market and mining exploration risks and production and economic risks related to design and engineering, manufacturing, technological processes and test procedures and the risk that the project’s output will not be salable at a price that will cover the project’s operating and maintenance costs.

The Sangihe Gold Project (“Sangihe”) is located on the Indonesian island of Sangihe, off the northern coast of Sulawesi. Sangihe has an existing National Instrument 43-101 inferred mineral resource of 114,700 indicated and 105,000 inferred ounces of gold, as reported in the Company’s “Independent Technical Report on the Mineral Resource Estimates of the Binebase and Bawone Deposits, Sangihe Project, North Sulawesi, Indonesia” (May 30, 2017). Readers are cautioned that mineral resources that are not mineral reserves do not have demonstrated economic viability. The Company intends to proceed to production without the benefit of first establishing mineral reserves supported by a feasibility study.

Baru has met all the requirements of the Indonesian government and has been granted its environmental permit. The Company has received approval for the upgrade of its licence to advance the Sangihe project to construction and production in late 2021/early 2022.

Baru Gold Corporation is a dynamic junior gold developer with NI 43-101 gold resources in Indonesia, one of the top ten gold producing countries in the world. Based in Indonesia and North America, Baru’s team of mining and finance professionals boasts extensive experience in starting and operating small-scale gold and coal assets. With sufficient funds and strong retail and institutional shareholder support, Baru is positioned to become Indonesia’s next gold producer.