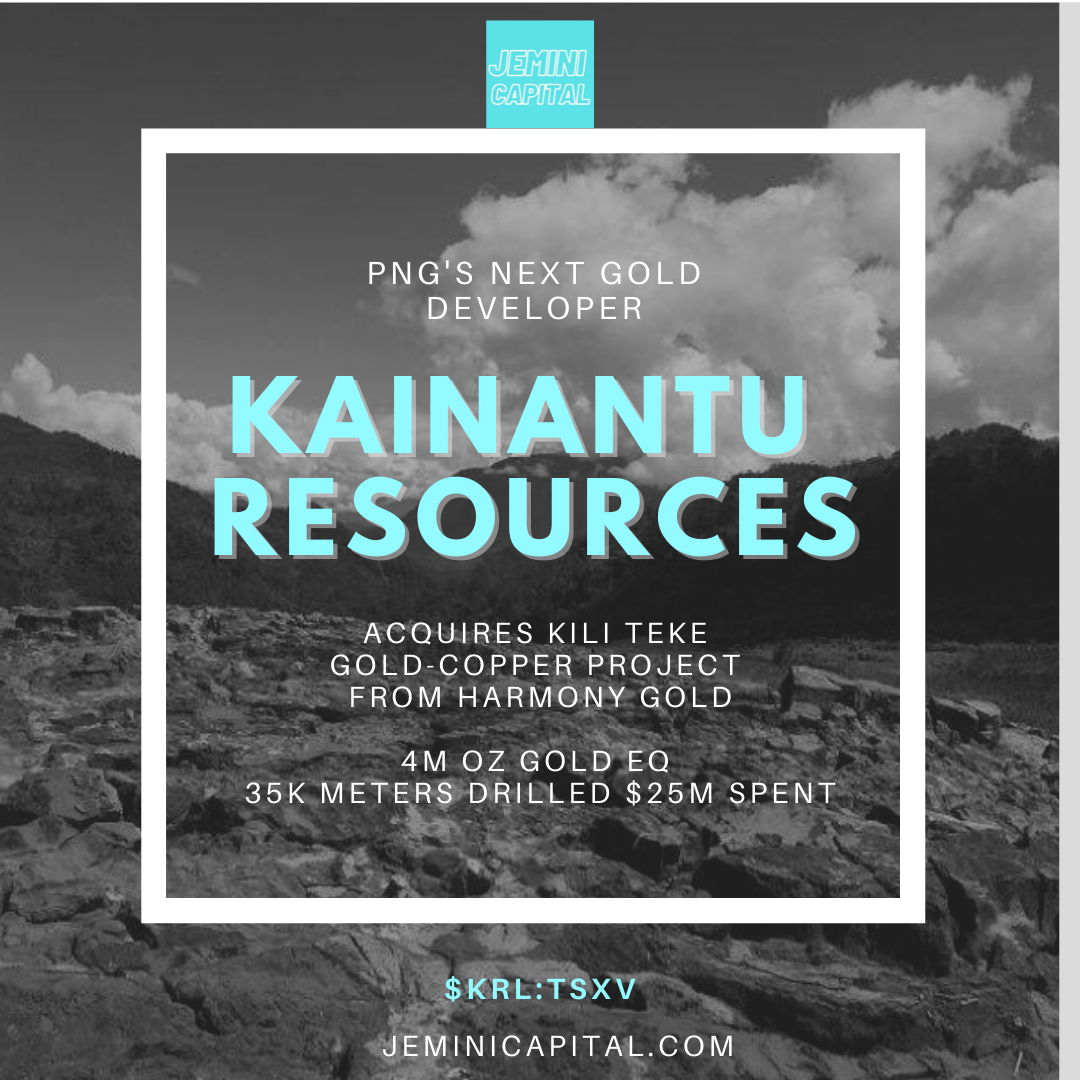 Kili Teke is a significant advanced exploration porphyry gold-copper project with an existing mineral resource, and potential for further re-optimization and discoveries to increase overall value.

KRL to acquire 100% of the Kili Teke project from HGEL:

Matthew Salthouse, CEO of KRL, commented: “We are delighted to announce the acquisition of Kili Teke which aligns with our strategy of building shareholder returns by executing value accretive acquisitions. In this regard, our extensive due diligence indicates Kili Teke will be a transformative and accretive acquisition for KRL and will elevate our asset portfolio, adding an established gold copper resource which has potential for significant growth.”

“The Project lies on the highly prospective Papuan Fold Belt which hosts world class projects, such as Ok Tedi, Frieda River and Porgera. We look forward to exploring and developing another potential world class project for the region.”

“This transaction moves KRL from a greenfield high potential explorer into being a resource development company with upside. For a junior to achieve this after a year of listing is a testament to the team’s vision on growing KRL via accretive transactions in combination with on-going field work.

HGEL has already made excellent progress to date in developing the Project, delineating an impressive copper gold resource of 800Kt copper and 1.8Moz gold; with the deposit remaining open to the southeast and down depth. Through the grant of warrants to acquire equity in KRL of up to 9.9%, HGEL has an option to engage further.”

“KRL will continue to deliver on our strategic objectives with Kili Teke a key catalyst in driving shareholder value as we develop as an Asia Pacific gold-copper mining company. “

“Harmony remains focused on permitting and delivering the much anticipated Wafi-Golpu project alongside its existing Hidden Valley mine life extension project. In addition to these on-going projects, Harmony has identified additional potential growth opportunities in and around the Hidden Valley mine. These multiple workstreams demonstrate our long-term commitment to Papua New Guinea, and will require significant investment and management resources over the next 5 years. We believe it makes strategic sense for the Kili Teke exploration project to continue with dedicated focus, allowing further value to be unlocked for all stakeholders in Papua New Guinea.”

KRL and HGEL have executed a definitive agreement for KRL to purchase Kili Teke by way of an asset acquisition. The acquisition is inclusive of the transfer of the Exploration Licence 2310 (“EL 2310”) and all associated assets and know-how, such as drill core, logs and data used to support the Mineral Resource.

The initial acquisition price payable by KRL is US$1 million, payable by two instalments of (i) US$500,000 on closing of the transaction and (ii) $500,000 on receipt of post-closing regulatory approvals (expected in late 2022 or early 2023).

Closing of the transaction is subject to customary closing conditions, including the approval of the TSX Venture Exchange (the “TSX-V”), PNG regulatory approval and registration of the sale agreement and all schedules to it, and KRL (at its discretion) raising financing of up to US$1 million. The parties are targeting closing of the transaction by May 31, 2022, at which point KRL will assume 100% ownership of the Project.

If KRL completes and publishes such Preliminary Feasibility Study or Feasibility Study (at KRL’s discretion), then a further and final payment of US$4 million will be made to HGEL within six months of publication.

In addition to the cash payments, KRL will grant HGEL a 1.5% net smelter royalty upon the commencement of commercial production in the future.

KRL will also grant HGEL common share purchase warrants on closing of the Transaction exercisable for up to 9.9% of the Company’s issued share capital as of closing the Transaction, with each warrant being exercisable at an exercise price of C$0.28 per share, representing a 25% premium to KRL’s 30-day VWAP to April 5, 2022. HGEL has also been granted anti-dilutions rights with respect to future financings of KRL to maintain its equity ownership in KRL.

The definitive agreement also contains other terms and conditions as are customary for a transaction of this nature.

The acquisition of Kili Teke will provide KRL with immediate ownership of a quality exploration project in a region well known to KRL management and stakeholders. The Company views the acquisition as transformational for KRL, given the clear development nature of Kili-Teke (beyond early-stage greenfield exploration).

Amongst other objectives, the Transaction:

The Project comprises of EL 2310 and is located approximately 40km west-northwest of the Porgera Gold Mine, in the Koroba-Kopiago District of Hela Province, PNG. EL 2310 was granted to HGEL in May 2014 and has been renewed three times. The EL remains in good standing and is currently subject to a further renewal application at the end of the current term in May 2022. Pending renewal, the EL remains on foot with KRL entitled to continue to explore the project as is customary under PNG mining law.

An Inferred Mineral Resource of 237Mt @ 0.34% Cu (=0.8Mt Cu), 0.24g/t Au (=1.8Moz Au) and 168ppm Mo (=0.04Mt Mo), with an effective date of 30 June 2021 has been established by Harmony for the Project in accordance with the South African Code for the Reporting of Exploration Results, Mineral Resources and Mineral Reserves (SAMREC, 2016 Edition) (www.samcode.co.za), which is recognised and accepted for the purposes of National Instrument 43-101, Standards of Disclosure for Mineral projects (“NI 43-101”). As part of the Transaction, KRL intends to file with applicable Canadian securities regulators and the TSX-V, within 45 days of this news release, an NI 43-101 compliant technical report in respect of the project.

In developing the Project, HGEL drilled 54 holes (for 36,325m), at an estimated cost of US$20 million. With multiple work streams ongoing in PNG, Harmony has taken a strategic decision to sell the Project to KRL as a credible junior explorer to allow exploration on the project to continue with a dedicated focus.

The Project lies within the Papuan Fold Belt, a mixed terrane of limestone and clastic sediments which have been strongly folded and thrusted during the evolution of the New Guinea magmatic island arc, on the northern margin of the Australian tectonic plate.

These world-class ore deposits are all located close to major deep-seated transfer faults which accommodate lateral slip between adjacent segments of the Australian plate, as it moves northwards. Kili Teke is located on the strike extension of a transfer fault and is highly prospective, as shown in Figure 1.

Kili Teke is hosted by a late Miocene (3.59plus or minus0.5Ma to 3.50plus or minus0.04Ma) multi-phase, intermediate-composition, intrusive complex (including diorite, microdiorite and hornblende porphyry lithologies), and associated breccias and skarns, as indicated in Figure 2. The latter occur both within (along structures), and on the margins of the intrusive complex, in limestone host rock.

Studies indicate the strongest mineralisation is developed as disseminated and vein infill chalcopyrite, with lesser bornite, pyrite, gold and molybdenum, in two classic, porphyry-style stockworks: the Northern and Southern Stockwork Zones (NSZ and SSZ). Both of these high-grade zones are offset at depth by post-mineralisation faulting. A single drill intercept, from KTDD013, reported 319m@0.8% Cu & 0.57g/t Au, which demonstrates that this is a significant deposit, with high-grade potential.

Several zones of high-grade skarn mineralisation are also recognised, but the drill density is insufficient to confirm continuity at this stage and they have been excluded from the current Mineral Resource estimate. In due course, a priority for KRL will be further investigation of this skarn mineralisation.

Importantly, the controls on high-grade mineralisation have not been defined. There remains residual upside potential to expand high-grade zones.

Importantly, and as noted above, this defined Mineral Resource excludes all high-grade skarn intercepts because the drill density was considered insufficient to prove the continuity of these mineralised zones: see Figure 3, indicating the high-grade skarn area. These remain a viable exploration target, and an opportunity to increase the metal inventory significantly. (The inclusion of skarn mineralisation in a previously reported Mineral Resource potentially added 11% and 10% more Cu and Au metal, respectively, to that estimate.)

In addition to the deposit drill-out, in 2016 HGEL drill-tested 3 exploration targets close to Kili Teke. Of interest is the Ridge Gold Anomaly (RGA) target, located within 1km of the main resource, which has not been adequately explored as yet. This target was defined by surface geochemistry in stream sediments, and has subsequently been confirmed in soils and bedrock, via trench sampling (5m@0.37g/t Au & 0.77% Cu) and anomalous rock chips (up to 3.5g/t Au). The bedrock anomaly potentially extends beneath a limestone cap cover sequence, which means that RGA may be a much larger target than has been considered before. This will be another area of focus for KRL with the likelihood of further drilling at this target.

A conceptual mining study has been completed for the Project (completed by Advisian, a consulting business of the WorleyParsons Group) to investigate the economic potential of an open pit and underground block cave development. This study was independently reviewed by AMC in 2017. KRL is keen to test the viability of an open pit operation. Compared to Harmony as a smaller operator, KRL will consider ways to re-optimise the Project with a focus on higher grades and lower through-puts, with an open-pit approach as one way to potentially optimise economic value.

To date, desk top studies by KRL suggest that an open pit operation is potentially viable (with a robust economic return) on the definition of more high-grade ore. In due course, this would require further infill drilling, focused initially on the two high-grade stockwork zones (NSZ and SSZ) and the marginal skarns; and any other features that can be targeted if the controls of mineralisation can be determined. KRL expects further investigation on the viability of these options are part of the intended work towards a PEA and Feasibility Study.

Local infrastructure to support a new mine at Kili Teke is favourable. The Hides gas power station, which supplies power to the Porgera Gold Mine, is 50km south of Kili Teke; and the largest sealed airstrip in PNG, at Komo, is 80km to the south (and there are dirt strips much closer, at Auwi and Tari). The government has announced funding to build sealed roads between the local towns of Komo, Tari, Korobo and Mendi, all of which would serve a future mine at Kili Teke.

KRL stakeholders have significant experience operating in the Hela District where the Project is located. Based on initial discussions with relevant community groups, KRL is confident it can develop a viable community programme at Kili Teke.

KRL will continue to work co-operatively with the management of HGEL to obtain all necessary regulatory approvals to close the acquisition and consolidate the Project into KRL.

Although KRL remains fully funded in order to complete the Transaction in the short term, closing of the Transaction is subject to KRL raising financing of up to US$1 million (or waiving this condition).

The scientific and technical information disclosed in this release has been reviewed and approved by Graeme Fleming, B. App. Sc., MAIG, an independent “qualified person” as defined under National Instrument 43-101, Standards of Disclosure for Mineral Projects.

Both KRL North and KRL South show potential to host high-grade epithermal and porphyry mineralisation, as seen elsewhere in the high-grade Kainantu Gold District. The May River project is in close proximity to the world-renowned Frieda River Copper-Gold Project, with historical drilling indicating the potential for significant copper-gold projects. KRL has a highly experienced board and management team with a proven track record of working together in the region; and an established in-country partner.